White is my color.
My fur is so fluffy like no other.
Tail so bushy; nose so pink.
Whiskers so long, they make me unique.
Pointed ears on top of my head,
I can’t wait until I am fed
Who am I, What can I be?
I’m a cute little bunny;
Can’t you see?

Mortimer is yet another of Wonderland's "Big Brown Bunnies".  And proud to be so.  A bit of a momma's boy, Morty is just a great house bunny.  He has good litter habits and is doing what we call "moating".  That is when they do a circle of their dry poos around the perimeter of the pen to keep other bunnies from crossing the (invisible) line.  This behavior usually ends once they have a home to call their own with no other bunnies to threaten their food source or take away from their special cuddle time.  He fits into our "large" bunny category, at about 10 pounds.  He came to Wonderland (to be inserted along with age).  He has been neutered and is ready for his furever home.
​ 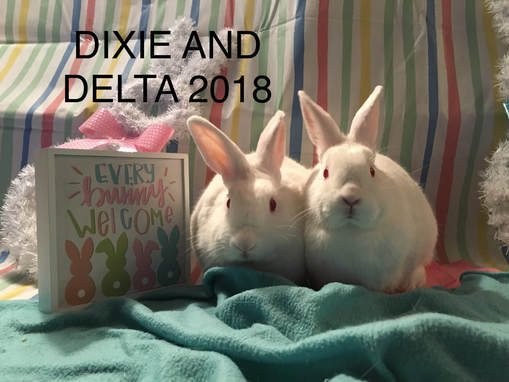 Dixie and Delta turned one year old in April 2017. They came to Wonderland from Baton Rouge LA.  Their Rescue there suffered damage from flooding and all rabbits there were shipped across the U.S. to Rescues offering to help.  Originally they were part of a litter of 7 born to a mom in the Rescue and they were all named after the 7 dwarves.  Dixie and Delta were originally "Sleepy and Dopey", and as appropriate as it was, we renamed them to reflect the area they came from  They were shy at first (they came in at 4 months old). They have been spayed, have good litter habits, are friendly and social and are ready to be adopted, as a pair only!
​

​THE RABBITS (AND OTHER SMALL FURRIES BELOW) ARE SPECIAL NEEDS AND LIVE IN THE SANCTUARY HERE AT WONDERLAND.  THIS MEANS THEY HAVE MEDICAL, PHYSICAL AND BEHAVIORAL ISSUES THAT MAKE THEM HARD OR IMPOSSIBLE TO ADOPT OUT.  WHILE THEY WILL PROBABLY STAY HERE FOREVER, WE ALWAYS WELCOME PEOPLE WHO WOULD LIKE "SPONSOR" THEM.  THIS WOULD BE A SMALL DONATION EACH MONTH TO HELP DEFRAY THEIR NEEDS.  IF YOU LIVE IN THE GREATER DETROIT AREA WE ALWAYS WELCOME VISITS FROM SPONSORS TO VISIT WITH THE SPECIAL BABIES THEY ARE SPONSORING.  IF YOU ARE INTERESTED IN SPONSORING SEND US AN EMAIL AT WONDERLANDRR@GMAIL.COM
​

Mandy was one of the first bunnies to come to Wonderland Rabbit Rescue.  Here almost 6 years (as of 1/2018) Mandy presented almost immediately with a neurological disorder known as "Head Tilt".  We treated her with the usual 30 day protocol of medications and she returned to normal to only tilt the other way a month later!  She has been stable with a 45 degree tilt for the last 4 years.  She was able to be spayed and is a very happy active bunny.  She loves her Barney (a gift from a FaceBook fan who saw her story) and she visits with the other Rescue bunnies.  (Although she doesn't like many of them!)  We call her the "fastest" rabbit in the Rescue as she can get from one room to the next so fast we often lose track of where she has gone!
UPDATE 3/2018  MANDY WAS RECENTLY DIAGNOSED WITH A CANCEROUS MASS WHICH WAS REMOVED.  OUR FINGERS ARE CROSSED THAT THEY GOT IT ALL.  WE ARE WATCHING HER CLOSELY.

SPECIAL NEEDS:  UPDATE:  SADLY SALT LOST HIS LADY LOVE OF 11 YEARS.  HE IS GOING THROUGH SOME DEPRESSION BUT LIVES NEXT TO SUESS WHO LOST HIS COMPANION VINNIE ALSO THIS YEAR.  .
Salt and Pepper were a married pair for 10 years.  In 2016, Pepper left for the Rainbow Bridge.  Salt has been very quiet since.  We put him next to Mandy after Pepper passed and they bonded through the pens and now are very best friends and share a large playpen where they spend their days cuddled up watching the Sprout Network.  2017. Salt is the white and orange up ear rabbit on the left.

ANOTHER UPDATE 3/2018.  WE HAD TO SEPARATE BETTY AND VERONICA DUE TO FIGHTING.  COME TO FIND OUT THEY WERE GOING THROUGH THEIR FIRST 'SEASON' WHICH APPARENTLY MAKES THEM FIGHT.  IN APRIL WE WILL ATTEMPT TO REBOND THEM.

UPDATE JULY 2017.... Okay so we have gotten more comfortable with Degus.  It took over 6 months to realize that while they are not that friendly they need and want constant attention.  We have redone their enclosure a couple of times and since they still have not been adopted I am sure we will be doing it again soon.  Degus need a metal wheel and that has been the biggest obstacle.  Most metal ones are made for Chinchillas (a distant relative of the Degu) and they have small holes all over the running part of the wheel.  I found instructions online on how to make a wheel but the first try has been a failure!  If a perfect adopter ever comes forward, I think they will take their living quarters with them along with all the goodies they have come to love

​Betty and Veronica, a bonded pair of female Degus, came to Wonderland December 23, 2016.  There still seems to be some debate on how old they are, but we do have an educated guess on 6-9 months old at time of surrender.  They were in a horrible situation and needed to be removed ASAP.  So they are here.  We are working with them daily and hope to have them as adoptable as possible before rehoming.  NOTE:  Degus are NOT holding animals!  They, for the most part, DO NOT LIKE TO BE HELD!  They can, do and have bitten.  It is painful!  They will only go to an EXPERIENCED HOME that will provide verification from an exotic veterinarian that they have owned Degus in the past.